The September hearing held by the House subcommittee on Coast Guard and Maritime Transportation centered on maritime transportation regulations and their ultimate impact on safety, security, jobs and the environment. As various industry advocates used the public venue as a vehicle to vent and for elected officials to call attention to various ‘rice bowl’ agendas, the scope and breadth of the regulatory labyrinth being endured by the domestic maritime industry became fully evident. A primary focus of the meeting involved ongoing delays at DHS and the U.S. Coast Guard in getting regulations passed in a timely fashion. Indeed, U.S. Coast Guard Rear Admiral Joseph Servidio, Assistant Commandant for Prevention Policy, admitted to a backlog of some 68 projects (rulemaking efforts) that would still be in play by the end of this calendar year. Of particular interest to many was the proposed so-called subchapter “M” rule that will profoundly affect the inland towing industry, if and when a final rule ever gets passed. But, as MarineNews readers will soon discover, Subchapter “M” is just one of dozens of rulemaking efforts on the plate of the U.S. Coast Guard. And, after scrolling through the (complete, 68 item) and mind-numbing list below, you’ll discover why it’s no wonder that it takes forever to get anything done:

The latest issue of MarineNews, in part, also focuses on regulatory issues and compliance. As it turns out, it really doesn’t matter where you sit on the waterfront – in the terminal, port authority, OEM manufacturer, training entity, on board the vessel or in the boardroom itself – you’ve got something to worry about.  Access the full set of rulemaking efforts, and expanded views of each by clicking: http://www.uscg.mil/hq/cg5/cg523/projects.asp. 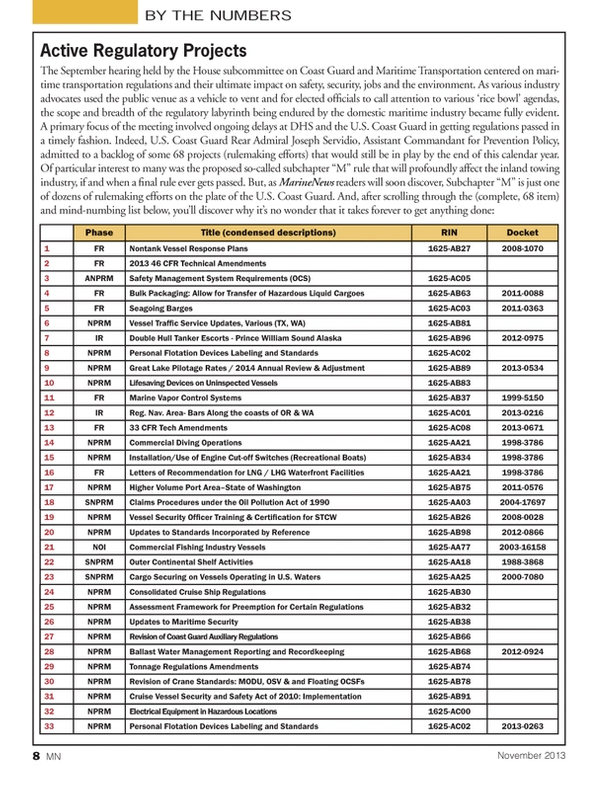