Dennis L. Bryant retired from the U.S. Coast Guard with the rank of Captain after 27 years active duty. His billets included serving on the icebreaker NORTHWIND for several years including in 1969 when it escorted the tanker MANHATTAN through the Northwest Passage (this was back in the old days, when there was real ice in the Arctic). He also spent various tours as a law specialist, including an assignment as the Coast Guard’s Law of the Sea officer. He also served a tour in the Office of International Affairs and finished his career supervising the staff charged with implementing the Oil Pollution Act of 1990 (OPA 90). After leaving the Coast Guard, he was with a major maritime law firm for 13 years. Now an independent consultant, and when not guiding his clients in navigating the complicated world of regulatory compliance, he also speaks at various forums, both domestically and internationally. His blog on recent maritime developments is always well received on the Maritime Professional web site as well as his own venue. Dennis also frequently writes maritime-related articles for various trade magazines and his work is frequently quoted by the trade press.

This month in MarineNews, we explore the current regulatory and compliance environment facing domestic maritime industry, as well as every foreign-based marine entity that hopes to do business with a country that transports 95 percent of what it consumes on the water. To that end, there is arguably no better qualified expert on the full breadth of maritime regulatory issues than is Dennis Bryant. He weighs in this month on a raft of different questions and quickly distills down to the lowest common denominator, some of the prickliest challenges facing both the commercial sectors and also the regulators themselves. We started out by asking him to comment on five specific rulemaking efforts. Listen in as he gives his unvarnished take on all of it:

Subchapter M (The Coast Guard’s effort to establish safety regulations governing the inspection, standards, and safety management systems of towing vessels):
The move to convert the U.S. towboat sector from uninspected to inspected was initiated by the towboat sector itself, which wanted to get out from under the thumb of the Occupational Safety & Health Administration (OSHA). The conversion turned out to be more complex than they envisioned.  In addition, it quickly became clear that the Coast Guard lacked the manpower to conduct all these inspections in the same manner as it did with the blue-water fleet. Thus, a new paradigm has been crafted with private sector inspectors working under USCG standards. The final regulation is expected to be promulgated in 2014. Only time will tell how this new system works out.

OPA 90 Salvage Marine Fire Fighting (SMFF) rules:
The salvage and marine firefighting final rule was published on 31 December 2008. Initially, it applied only to tank vessels and implementation went smoothly. The new NTVRP rule incorporates the salvage and marine firefighting requirements, so covered nontank vessels must also plan for these issues. I foresee some difficulty here as many of the nontank vessels (particularly those at the lower end of the size limit and some of the older foreign vessels) may not have at hand all of the resources required, such as accurate, current, and detailed ship plans.

Ballast Water Regulations (IMO / USCG):
The ballast water management system process received a major boost when first New York and most recently California backed down from their requirements for unique and impossible standards.  Effectively, there are now just two standards in play: the IMO standard and the US standard. The IMO standard has not officially come into force yet, but is being used for installation of equipment on new ships worldwide. The US standard, which is a more stringent version of the IMO standard, is in effect, but no BWMS has yet been certified as meeting the requirements. In the meantime, the USCG is granting 5-year waivers for vessels that utilize the IMO standard.

Transportation Workers Identification Credential (TWIC):
An unmitigated disaster. The US Congress mandated this system in 2002, in reaction to the terrorist attacks of 11 September 2001. Rather than just say that security on vessels had to be tightened and leaving it to the professionals to determine how, Congress directed a biometric solution and (in a backdoor process) mandated various details of the credential. The Transportation Security Administration (TSA), burdened with high-priority aviation security issues, did not focus sufficiently on execution of TWIC process, attempting to utilize leading-edge and untried technology.

A primary focus of DHS and the U.S. Coast Guard is to get regulations passed in a timely fashion. The Coast Guard’s Assistant Commandant for Prevention Policy, RADM Joseph Servidio, recently admitted to a backlog of some 68 projects (rulemaking efforts) that would still be in play by the end of this calendar year. Do they have too much on their plates? Is there a more efficient way to get things done?
The rulemaking process could be advanced slightly if OMB did not take so long to process draft rules.  Speaking from experience, the process is complex. The Coast Guard works hard to get the rules right because it knows that those rules will have a significant impact on the regulated community.

A recent study (shown in the October edition of MarineNews) compared a particular aspect of minimally regulated commercial fishing vessels (CFVs) and their highly regulated small passenger vessels (SPVs) of 100 tons or less. The study revealed that random testing not only reduces the potential for marine casualties, but also enhances the safety of the maritime transportation industry. Is there a particular reason why one sector of the domestic marine industry is left out of the testing schemes while others are not?
The commercial fishing vessel industry has significantly more political power than does the small passenger vessel industry.
Does today’s Coast Guard have the necessary resources – and expertise – to administer to all of its regulatory responsibilities? If not, where in the U.S. government would some of those duties best be placed?
The USCG does not have the resources to fully perform its statutory missions. The only federal agency that could relieve the USCG of any of its burdens is the National Transportation Safety Board (NTSB), which could take over marine casualty investigation, but this could only occur if the NTSB were expanded.

Are there maritime/marine/transportation responsibilities best placed with the Coast Guard that currently reside elsewhere?
None that come to mind.

What, in your opinion, is the most onerous of the new regulations coming down the pike (or already here) for industry? Which one ranks as the least useful or sensible? Which will yield the greatest dividends (and original intent) for those who ultimately shaped the rules?
The biggest problem is not with the regulations; the problem is with the statutes. Congress keeps grafting new mandates onto old regimes, often in reaction to some newsworthy event.  A prime example is OPA 90, which mandated double hull tankers. There is nothing wrong with double hulls, but Congress should not be mandating a particular solution. Rather, it should mandate a standard and leave it to the professionals to work out the details. At the least, Congress should have said that all new tankers must adopt either double hulls or their equivalent, leaving it to the Coast Guard to determine what is equivalent. As it is, Congress has stifled innovation. No one is going to design an alternative hull for tankers knowing that if such a ship were built it could not trade to the United States. 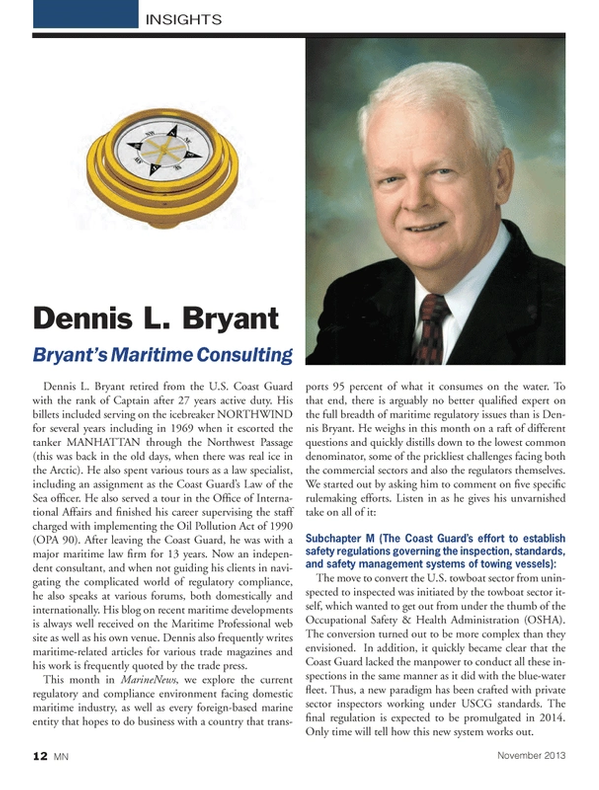