The next round of emission regulations will bring significant impacts to the design, construction, and operation of U.S. commercial and government vessels starting in 2014. The impending EPA Tier 4 regulations directly apply to high and medium-speed diesel engines used in workboats, ferries, small cargo ships, and government vessels. These regulations represent the most significant reduction of marine emission levels to date, specifically in the form of nitrogen oxides (NOx). Natural gas fueled engines present one path to compliance, but not the only path. For diesel engines, compliance can be achieved with specialized emission control technologies in the form of after-treatment or on-engine measures. With limitations in availability of clean fuels, diesel engines are often the only feasible or cost effective solution.

Emission Pollutants
The U.S. EPA and IMO regulate specific exhaust emission components as prescribed in 40 CFR and MARPOL Annex VI, respectively. Table 1 is a summary of these components and respective reduction solutions.

EPA Regulations
Since 2008, the EPA has been phasing in increasingly stringent emissions requirements in steps, or ‘Tiers’. Current U.S. marine diesels meet EPA Tier 2 or Tier 3 depending on their engine category. EPA Tier 4 is the latest step of regulations starting in 2014 and impacts all new marine diesel engines greater than 800 hp with per-cylinder displacements less than 30 liters. Tier 4 imposes major reductions in NOx, particulate matter (PM), and hydrocarbons (HC). The reduction of NOx, about 70% from Tier 2 levels, imposes the greatest implications to the vessel designers, shipbuilders, and operators. Since NOx results directly from fuel combustion at high temperatures, reduction requires specialized on-engine (primary) and/or off-engine (secondary) technologies, or the use of cleaner fuels like natural gas.

Compliance Approach No. 1 – LNG
LNG fueled engines burn cleaner and do not require after-treatment or specialized NOx abatement measures to meet EPA Tier 4. This in conjunction with its significantly lower fuel cost makes LNG an attractive option for compliance. In October, Wärtsilä announced the release of its 20DF dual-fuel engine for sale in the U.S. market to comply with EPA Tier 4.
LNG is not a silver bullet. Therefore, a systemic and quantitative approach to trading off LNG versus clean diesel options, as highlighted in Figure 1, is advisable. First, one must consider the availability of LNG in areas of operation. Though the fuel cost per unit energy averages about 85% less than marine distillate fuel, this “delivered price” can become less attractive when considering the infrastructure and transport cost [2]. If LNG is reliably available, a technical feasibility analysis is performed to determine if a vessel can meet the owner’s requirements with a dual-fuel or LNG-only system. The volumetric energy density of LNG when considered with its storage and support systems can be up to three times more demanding than diesels; a space penalty that many vessels cannot afford. If technically feasible, a total ownership cost analysis needs to compute a low enough payback period to justify the higher investment cost. Annual vessel utilization, maintenance costs, fleet composition and crew training are other critical factors to be considered.

Compliance Approach No. 2– Diesel with On-Engine Measures
The on-engine approach requires the addition of an Exhaust Gas Recirculation (EGR) system. EGR re-circulates a portion of the exhaust gas back to the engine cylinders. This lowers the oxygen content into the intake leading to lower combustion temperatures and less NOx production. A heat exchanger cools the exhaust air before entering the air intakes. Since combustion is less efficient due to lower combustion pressure, EGR presents a fuel consumption penalty. To offset this, manufacturers are implementing new generation common rail direct fuel injection systems with higher pressures. The common rail allows finer electronic control over the fuel injection to provide multiple controlled injections per stroke. EGR avoids the carriage of a special emissions treatment fluid, but adds weight and complexity on the engine. Also, EGR requires higher quality fuel with lower sulfur content for proper operation. Though not an issue in the U.S., this can could create risks for vessels operating abroad where low sulfur diesel may not be available. EGR is a mature technology widely used for on-road engines. In October 2013, GE Marine announced successful testing of its 12-cylinder V250 Marine Diesel Engine to meet EPA Tier 4 with an all on-engine approach.

Compliance Approach No. 3 – Diesel with SCR After-Treatment
Among multiple after-treatment technologies, the urea-based Selective Catalytic Reduction (SCR) system as shown in Figure 2, represents the most mature and available solution at present day. An SCR works by using a catalyst to chemically reduce NOx to clean nitrogen (N2) using the urea as a reagent in the presence of high-temperature exhaust gases. SCR is compatible with higher sulfur fuels and if necessary can be equipped with a soot blower to remove particulate matter.
In October 2013, Caterpillar Marine announced that their C280 and 3516C models will meet EPA Tier 4 using SCR after-treatment systems. Cummins Marine already uses SCR and indicates their planned use for higher horsepower marine engines to achieve Tier 4. Other engine manufacturers have also indicated SCR as their planned approach to compliance.

SCR After-treatment – Vessel Design Implications
With indications that many, if not most, of the marine diesel engine makers are taking the SCR after-treatment route to EPA Tier 4 compliance, the industry is hungry for data. Over the last few years, both commercial and government stakeholders have requested vessel designs to meet Tier 4. Naval architects need to understand the space, weight, and technical implications of supporting such systems. Though increasingly more available, data is still limited as to what and when engine options will be available in a Tier 4 configuration.
Gibbs & Cox partnered with Tenneco, an emissions technology leader, to understand the vessel design implications of incorporating a urea-based SCR system. Point design studies were performed to quantify the impacts of SCR systems on small and medium size commercial vessels. Two of these designs are highlighted in Figures 3 and 4. The SCR system comprises multiple subsystems including the mixing tube, catalyst module, and urea dosing system. First, the pump on the urea dosing system delivers the solution from the tank to the exhaust stream through injectors on the mixing tube. Then, in the presence of the hot exhaust gas, the urea decomposes to form ammonia. The ammonia reduces the NOx to clean nitrogen gas (N2) and water within the catalyst module. The urea dose and timing is coordinated by the dosing control unit using sensors for temperature, pressure, and NOx at the SCR.
The point design for an ocean tug showed that the added weight of the SCR system and urea equaled 1.7% of the vessel’s full load displacement. The added weight on a 350 ft multi-purpose vessel was 0.8% of its displacement. For both vessels, the SCR system occupied approximately 3% of the useable engine room volume excluding the urea tanks.

The SCR Mixing Tube and Catalyst Module
The SCR mixing tube and catalyst module comprise about 70% of the total system weight excluding the urea solution. The mixing tube needs to be positioned close enough to the engine exhaust to allow for high enough temperatures to facilitate the decomposition of the urea solution into ammonia. Minimum exhaust temperature varies based on installation, but 400 degrees Fahrenheit is a good ballpark number, according to Tenneco. An inherent level of acoustic noise reduction is provided by the SCR on the order of 20-25 dBA. Depending on the vessel noise frequency requirements, a smaller silencer and spark arrestor is necessary upstream of the SCR.

Urea Storage and Transfer
As a rule of thumb, a designer should allocate 5% of the total fuel volume for the urea solution.  For larger vessels, a day tank is positioned in proximity to the urea dosing systems. The urea solution is corrosive to bare steels and aluminums. As such, epoxy phenolic paint systems are required for coating carbon steel storage tanks; which are widely available from marine coating companies. Wet components of pumps need to be poly/plastic or stainless steel. The urea solution is not flammable or toxic in ambient temperatures but decomposes to ammonia when exposed to high temperatures, such as those caused by engine room fires. Since gaseous ammonia is a toxic inhalant, safety precautions are necessary – such as stainless steel piping in the engine room.

Operating Logistics
A 32.5% urea solution has been broadly available for years on our highways as Diesel Exhaust Fluid (DEF). This percentage provides for the lowest freezing point of 11 degrees Fahrenheit. For marine use, a 40% urea solution is favored as it comprises less volume and weight with a manageable freezing point of 32 degrees Fahrenheit; the same as water. Ship service companies, such as Wilhelmsen Ship Services (WSS), currently deliver a 40% Urea Solution to U.S. ports. Today, the deliveries are made by tank truck directly to the vessel in port, or by 260-330 gallon totes which can be loaded on board.  As demand increases, urea solution will become readily available at fueling piers.

Certification Requirements
Unlike IMO, the EPA allows only the engine manufacturer package to obtain emissions certification for new engines.  This means that shipyards, owners, or 3rd parties cannot perform their own packaging of lower tiered engines with an SCR after-treatment system to achieve Tier 4 certification.  This will limit engine selection for a few years to come. To date, only a small percentage of EPA Tier 4 compliant engines have been publicly released, increasing risk on new U.S. vessel build projects.

The Way Forward …
The Tier 4 compliance strategies identified herein are more complex than the previous generations of engines; translating to cost, technical, and performance implications for the designer, shipbuilder, and operator. The optimum solution for a specific application depends on the operator’s requirements. These include, but are not limited to: areas of operation, load profile, endurance, and ultimately total ownership costs.
What we can expect to see in the coming months and years, are announcements from engine makers indicating EPA Tier 4 certified engine packages. Some international engine manufacturers may opt not to invest in certifying an EPA Tier 4 engine, if the demand is not large enough. Rather, they will wait to the international implementation of IMO Tier III before introducing NOx abatement systems. This could limit engine options to U.S. customers for up to the next seven years. 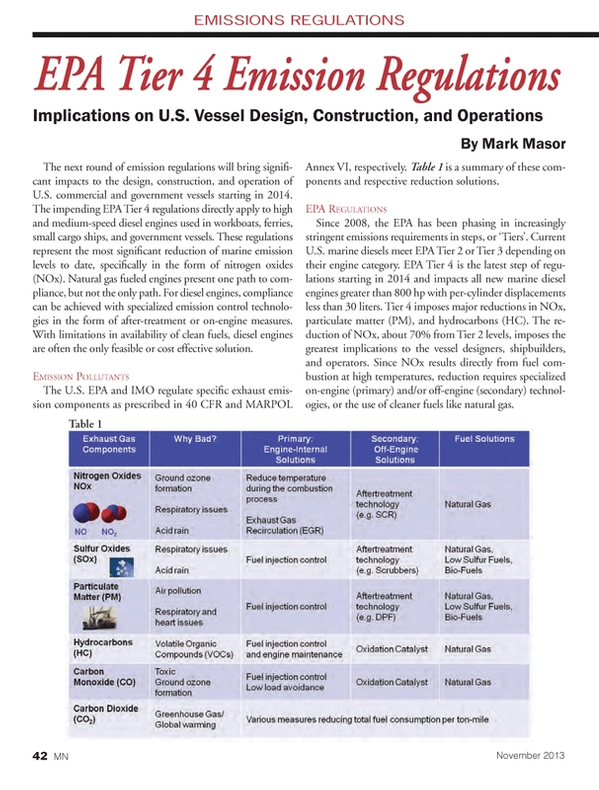