The Maritime Labor Convention of 2006 (MLC 2006) is now in force – although not here in the United States. How much different is what happens on MLC compliant ships from what transpires on U.S.-based, domestic workboats?

The Maritime Labor Convention of 2006 (MLC 2006) came into effect on August 20, 2013. Globally, the new rule impacts many aspects of how seafarers are treated, working conditions and a myriad of less well defined requirements that leave some operators scratching their heads to figure out. The United States has not ratified the Code and probably never will. That doesn’t mean that we don’t have work and rest rules under U.S. law, as well. We do.
Regulation 2.3 of the new MLC Code also delineates hours of rest and work for mariners. This type of regulation which mandates rest requirements is not new, but it may nevertheless change how vessels are manned, given the extra scrutiny that will now ensue. For those watching from the cheap seats in “unaffected” domestic inland, coastal and workboat trades, what unfolds next is worth watching.

Apples & Oranges: Work Limits & Rest Hour Minimums
It is funny (or, perhaps not) how references to work hour limits have been replaced with rest hour minimums (both are mentioned in separate but closely aligned paragraphs; Standard A2.3 paragraph 5a and 5b). In doing the math, a seafarer could be limited to 72 hours of work in paragraph 5a, but in paragraph 5b, the seafarer must have a minimum of 77 hours rest in a week but could work 91 hours which may be why companies follow Standard 2.3 paragraph 5.b.
According to paragraph 12, seafarers shall receive a copy of their daily rest hours which shall be endorsed by the Master, or by a person authorized by the Master and signed by the seafarer. There is no excuse for a seafarer not getting rest, because everyone of competent authority signed the sheet verifying knowledge of the seafarers rest hours.

Real Life: Actual Practice
Recently, an associate, while aboard a ship and speaking with the Master, asked to see the rest log. Everyone in the crew had exactly the same legal hours of rest and work. Upon further investigation of the logbooks, the reviewer discovered the whole engine department was resting while taking bunkers (fuel used for ships propulsion and auxiliary machinery). Having sailed for 35 years, I only heard of this type operation once where the deck department loaded bunkers aboard a tanker. The ship in question was not a tanker, but a bulk carrier.
After speaking with the Master regarding the anomaly, the Master admitted to falsifying the rest records. On a charter ship, in this instance, the operating expenses and crew costs were fixed, meaning they absolutely could not go over budget but the crew still had jobs to perform while making the most money possible for the company. The ship’s Master, wanting to make it most equitable for his crew, minimized work hours to legal limits on paper, even if the rest data showed they were resting in the middle of work hours (i.e. bunkering).  Obviously, the crew acquiesced by personally signing the rest log, necessary to protect their jobs because they have families to feed and house.
In another incident which further illustrates the problem, while reactivating a ship and trying to make the deadline for berth availability, a crew was working long hours taking care of the many problems of bringing a dead ship out of lay up while also making schedule. As part of the breakout procedures, the ship required an International Ship Management (ISM) certificate titled “Shipboard Management Certificate” (SMC), as well as the Document of Compliance (DOC). This entailed having an ISM audit while bringing the ship out of layup. These audits include interviews with crew members from various ship departments; Deck, Engine and Steward. In this instance, most of the crewmembers were not that familiar with their breakout ship and the interviews took much longer than expected. Because of this, the final meeting with the ship management team (Master, Chief Engineer, Chief Mate, First Assistant and Steward) was held at 2200 hours. Most likely, the team had been up since 0600 hours and didn’t stop for any rest during the day. In this instance, would the MLC 2006 have held sway? Could that ship have stayed alongside to allow crew sufficient rest before getting underway at 0300 hours without the ship’s Master suffering  the company’s ire and becoming unemployed?
The maritime industry, with its “can do” spirit would have seen that ship sail at 0300. In other words, it is okay to trouble the crew during rest periods if an official piece of paper is involved because the MLC 2006 is waived. Right?

Parallel Universe
Our counterparts who fall under the Federal Aviation Authority (FAA) would have stayed on the ground. According to the FAA, an airline pilot needs a 10-hour minimum rest period. The rule sets a 10-hour minimum rest period prior to the flight duty period. The rule also mandates that a pilot must have an opportunity for eight hours of uninterrupted sleep within the 10-hour rest period. Could the ship Master described in the previous paragraph comply with the sample FAA ruling? Absolutely not.
A final example involves some boats of less than 1600 gross tons involved in international trade may only carry one engineer. The boat in question has a Safe Manning Certificate issued by a competent authority that states only one licensed engineer is required aboard the boat. Alas, due to the lack of technical engineering personnel aboard this boat, most of the repairs are performed by shore based entities while the boat is in port. Typically, these repairs are supervised by the boat’s engineer because that engineer will ultimately have to live with any outcome. The repairs occur at all hours due to berth scheduling. Our engineer has been up without a “rest period” for 15 hours. When questioned upon his lack of rest, the engineer stated, “When the boat is tied up, I am considered a shore based engineer so the rest rules do not apply.”  Considering when the boat lets go and proceeds to its next berth, and when our engineer will be required to work, will the Port State Control tasked with enforcing the MLC 2006 put an end to this practice? That answer may be as unclear as some of the other provisions of the code which are largely left open to interpretation.


The Oil Pollution Act of 1990 (OPA 90) : “On a tanker, a licensed individual or seaman may not be permitted to work more than 15 hours in any 24 hour period, or more than 36 hours in any 72-hour period, except in an emergency or a drill. In this subsection, “work” includes any administrative duties associated with the vessel whether performed on board the vessel or onshore.” If a crewman works 15 hours in one day that crewman must have the compensatory rest period off in order to attain the 36 hours of rest in a 72 hour period. The Issue: Who is going to perform the crewman’s work while our crewman is resting per OPA 90 minimum rest requirements? Given the limited number of crew available and aboard vessels trading in domestic U.S. waters, who is left to pick up the load?

Effective Manning Practices
Effective manning is, as it turns out, more than a “catch phrase”. One shipping company representative stated, “You could have 40 crewmembers aboard ship and still have fatigue problems, because it comes down to fatigue management.” Given that the norm for crewing most ships now is 20 versus the hypothetical 40 crew, who will be called to replace an individual due to lack of rest when there is no one to replace our fatigued crewman?
Nominally, it is fine to increase crew size, but under the present monetary compensation system, increasing crew size means someone is going to make less money. On charter ships, as in the first example, the crew will make less money collectively if more crew signed on. The easy answer is to increase rates to provide for the increased crew or suffer the cost of a detained ship. Which is cheaper?
Some company ships have added a line to the Rest hour sheets and others to the overtime sheets attesting to the fact that the crewman has followed the MLC 2006 rest requirements. Typically, this notation is positioned immediately next to the signature line. A crewman signing on the line certifies compliance with the Rest Requirements or faces dismissal. If the crewman puts in the hours actually worked or doesn’t rest and is not in compliance with MLC, then that crewman will lose his job. Hence, it is more than likely that seafarers are being coerced into falsifying the work/rest logs. Those companies that do – as was discovered by our ship inspector as previously described – are trying to skirt the MLC 2006 treaty and thereby enjoy a competitive advantage by not hiring more crew to allow more rest and avert causalities due to fatigue. Crew advocacy groups have advised crewmen to sign the sheets only after striking the attestation clause.

Cause & Correction: Will MLC Provide the Panacea?
Human error is responsible for over 58 percent of all ship casualties and fatigue represents the largest portion of human error for major claims according to a Protection and Indemnity Club. That’s a fact. How can fatigue be reduced? It is simple, really: by using the MLC (2006) Code to effectively enforce its mandates equally and unilaterally and getting experienced Port State Control  inspectors  who are able to understand operations and decipher the “gun decking”(falsification of records) on rest logs. Unless the MLC is enforced unilaterally throughout international trading fleets, there will remain a competitive advantage for those who gun deck the rest logs. The practice also defeats the ultimate goal(s) of MLC and OPA 90 itself, some of which include fair treatment of seafarers and the provision of a safe workplace for all.
From this side of the pond – and whether adhering to MLC (2006) or OPA 90 rest rules – there are lessons to be learned. The practice of fudging work and rest logs isn’t unique to any one sector of the marine world, flag or nationality. Nor should it be tolerated. 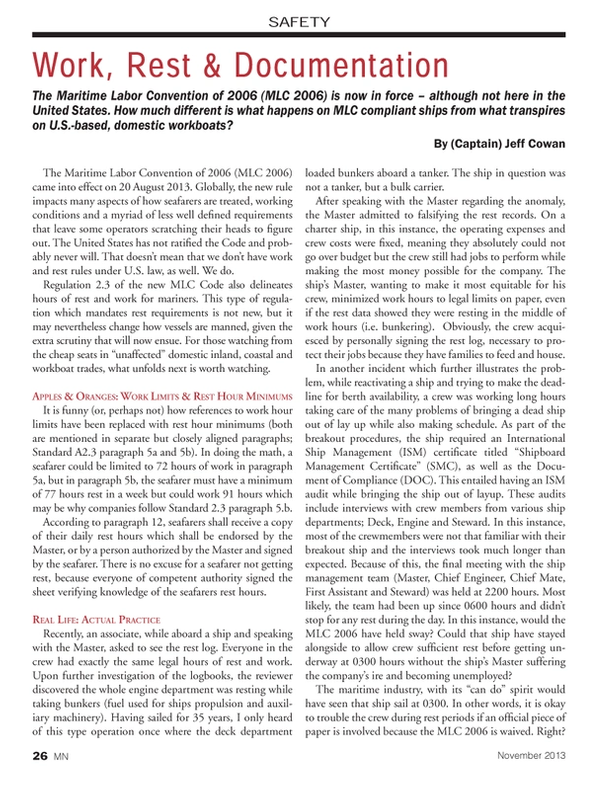