It isn’t always about the rate.

In a robust boatbuilding market – like the one we see now – even the most successful, financially stable operators need to borrow. And, if that newbuild or conversion program involves a significant fleet expansion, then everyone will need to leverage their business model. So, you’ve assembled and sent off your financial package to a handful of lenders, answered most of their questions and now have a number of their proposals or term sheets in front of you.
While the proposals are generally similar, some are not, especially from non-commercial marine lenders and may contain arcane language or confusing structure. Evaluating one proposal over another to determine suitability and competitiveness is a key to securing the best financing or leasing facility for your company. The formats of most proposals generally follow a certain format. Sure, the rate offered is important, but ultimately, understanding the nomenclature is the key to selecting the right option for you and your growing operation.

Garden Variety Proposals
Construction Loan Proposal: The potential lender will specify the rate and term of the loan; name corporate and/or personal guarantors; describe the asset(s), including vessel specs, cost, propulsion system and major equipment; shipbuilder information; progress payment or milestone schedule; repayment scheme; assignment of construction contract; insurance requirements; capitalized or periodic interest payments; advance against cost; value of owner-supplied equipment or additional collateral; either floating or fixed interest rate and to what it is indexed; break funding penalty if any.  Expect a “material adverse change” (MAC) clause in the general terms of the loan. A MAC clause is the lender’s escape language which requires the borrower to repay all loan amounts advanced in the event of a major decline in the financial health of the obligor’s business.
Term Loan Proposal:  A term loan usually follows the termination of the construction loan (if there is any). The potential lender describes the collateral, lists any additional collateral to be pledged; describes the method for release of additional collateral; names guarantors; specifies loan amount and down payment. The lender will propose the term of the loan; the interest rate, corresponding index and the amortization period. Various repayment terms may be offered including seasonal payments; non-standard payment intervals; balloon payments; delayed principal payments or other, sometimes highly creative payment plans. Additional language may include prepayment penalties, survey requirements, fees and other costs to be incurred by the borrower.  Insurance requirements vary and are dictated by the vessel’s usage characteristics. Expect higher limits to be required for vessels that transport petroleum or other noxious liquid or dry cargos.
Bareboat Charter or Lease Proposal: What is in effect a proposal to offer terms and conditions to rent a vessel for a specified period of time, a lease will vary from a loan proposal in a number of important ways. There are two major flavors of a lease, operating and capital. If:

Then: the lease is a capital lease which is, in effect, a financing agreement. The lessee claims depreciation and interest on the vessel, the lessor shows the interest charged as income. If it is not a capital lease, it is an operating lease and depreciation and the cost of borrowing to finance the vessel is claimed by the lessor. The lessee can claim rent paid to the lessor as a deduction on his/her taxes.
Expect a lease proposal to specify the type and terms of the lease that is being offered. Information should include:  the length of the lease (the term or tenor); payments in advance or arrears; the monthly or other interval between payments; the payment amount specified as a dollar amount or lease rental factor; insurance requirements; a possible early buyout option (EBO) wherein a fixed price at a specified date is offered for the purchase of the vessel; and termination options at the end of the lease. These options may include a return to lessor provision, an opportunity to purchase the vessel or the option to re-lease the vessel for an additional term. The lessor will disclose the index used to determine the rate, but usually will not offer either the actual rate being charged or the residual value set by the shipowner of the asset at termination.

Evaluating the Proposal
Most loan proposals can be evaluated simply by comparing advance, interest rate, term, points or fees paid by the obligor. Others may have included requirements that specify when and how much it would cost to pay off or terminate the loan. Still others may require that certain covenants for debt and interest service coverage or liquidity ratios be met and maintained. Prohibitions on secondary mortgages, assignment of equity or limitations of distributions to shareholders are other possible covenants. Violations or breaches of these covenants may result in a default and the lender “calling” or accelerating payment of all future payments or increasing the pricing of the loan. No covenants are the best covenants.
Comparisons of leases or Bareboat Charters are not quite as simple, although the basics are the same.  There is inherent risk incorporated to most operating leases which generally occur at the termination of the lease.  Leases are available in a number of different “flavors.”  Some carry more risk and some carry less ... most risk lies in the value of the vessel at the end of the lease. In a fair market value termination, the vessel can be purchased at the then current fair market value (FMV) as determined by an independent surveyor. Further, the option to re-lease the vessel for additional periods may be based in part on payment history of the lessee and the then current index.  What may be available to the lessee to mitigate some of the FMV risk in a operating lease or bareboat charter is the EBO.  Given that if the lessor’s profit (Internal Rate of Return or IRR) on the vessel’s lease remains the same, then  the greater the amount of the EBO, the lower the amount of the rent . . . and vice versa. The EBO must meet the Internal Revenue Service’s “compulsion test.”  The purchase price of the collateral cannot be less than the present value of the remaining rents plus a FMV worth not less than 20% of assumed value. The lender’s rate of return of the lease and the EBO are generally the same. It is this value of this IRR which, in addition to the rent and amount of the EBO that is used for comparison between one proposal and another.
As the actual calculation of the internal rate of return at the EBO is arcane at best, contact your CPA or financial analyst for their professional expertise in performing such calculations and shrink the mountain of proposals to the one that suits your business best. And, remember, it isn’t always just about the rate. 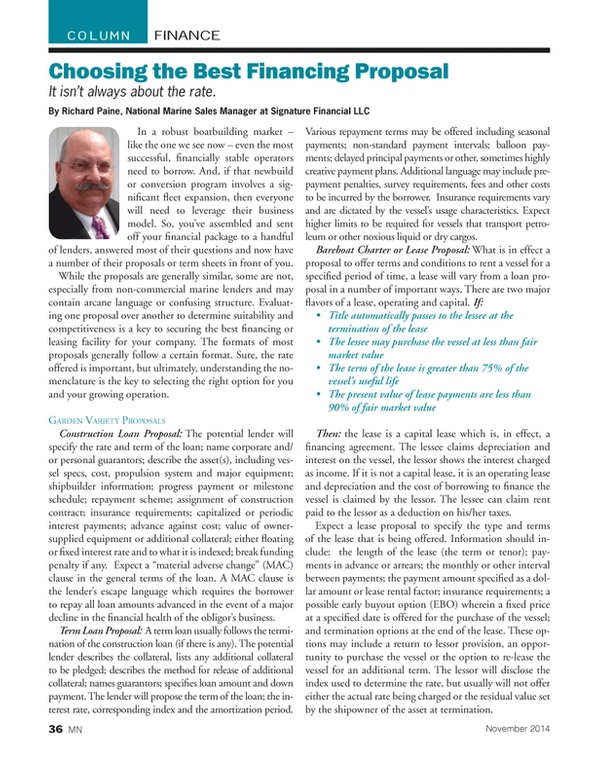