By James A. Kearns

Specifics – and Caveats, too
Among these provisions are Sections 2004 and 5014 of WRRDA. The first of these provisions, Section 2004, is captioned “Inland Waterways Revenue Studies,” and requires the Secretary of the Army to conduct a study on the “potential benefits and implications of authorizing the issuance of federally tax-exempt bonds secured against the available proceeds, including projected annual receipts, in the Inland Waterways Trust Fund.” This section also requires the Secretary to conduct a separate study of the “potential revenue sources from which funds could be collected to generate additional revenues for the Inland Waterways Trust Fund.”
The second provision, Section 5014, captioned “Water Infrastructure Public-Private Partnership Pilot Program,” requires that the Secretary establish a “pilot program to evaluate the cost effectiveness and project delivery efficiency of allowing non-Federal pilot applicants to carry out authorized water resources development projects for coastal harbor improvement, channel improvement, inland navigation, flood damage reduction, aquatic ecosystem restoration, and hurricane and storm damage reduction.”
Of the two provisions, the public-private partnership (P3) pilot program under Section 5014 has received substantially more attention in the maritime press and at industry conferences than have the studies of federally tax-exempt bonds and potential sources of additional revenue for the IWTF under Section 2004. One of the reasons for this disparity might be that Section 5014 authorizes a pilot program to be actually conducted, while Section 2004 provides only for studies, which might—or might not—result in further action. (For both provisions, it should be kept in mind that WRRDA is only authorizing legislation; it does not provide funding for the studies and projects that it authorizes. Such funding is provided—if at all—only as part of the annual appropriations process in Congress.)

USACE Listens – But, no easy answers
Soon after the enactment of WRRDA in June of this year, the U.S. Army Corps of Engineers scheduled four listening sessions to receive public input on those provisions in WRRDA that are the responsibility of the Corps.  The listening sessions were organized according to specific themes selected by the Corps, with each session covering the provisions of WRRDA related to the particular theme of that session.
The second of these listening sessions was held on August 27, 2014, and focused on the provisions of WRRDA related to alternative financing, including the pilot program for public-private partnerships under Section 5014. Section 2004 was not included in the list prepared by the Corps of WRRDA provisions to be covered in that listening session, and no one commenting in the session mentioned it.
But this little-noticed provision may yet have its turn in the limelight. Each discussion of public-private partnership financing inevitably comes down to the question of how sufficient revenue will be generated from the P3 project to provide the return on investment required by the private sector partner. For the inland waterways infrastructure, the greatest funding needs are associated with the system of locks and dams and with the dredging of ports and river channels. Therefore, these are the projects that are most often studied as possible candidates for the use of P3 financing. Various suggestions have been made for how such a P3 project could, on its own, generate a return on investment sufficient to attract private sector funding. These suggestions have included user fees or other payments by users for services (including lockage fees and ad valorem cargo fees), tax increment financing, revenues from hydropower or hydrokinetic energy generation, and revenues from commercial development.
None of these possible revenue sources has, as yet, attracted an enthusiastic following; in fact, the proposal of lockage fees has been roundly rejected by nearly every segment of the inland waterways industry. So where will the revenue come from?

Common Sense Funding Relief?
A simple and straightforward solution would be to use the fuel tax revenues that the IWTF receives each year. Indeed, this approach has been proposed by a study prepared for the United Soybean Board by the Center for Ports and Waterways of the Texas Transportation Institute, titled “New Approaches for U.S. Lock and Dam Maintenance and Funding,” published in January 2013 (the USB Study). (A copy of the USB Study can be found, among other places, on the website of the Soy Transportation Coalition at www.soytransportation.org.)
The USB Study presents three scenarios to illustrate how the IWTF receipts could be used to support the issuance of bonds to finance capital projects on the inland waterways. The three scenarios are all essentially the same in their underlying approach. In each scenario, the projected annual receipts of the IWTF are pledged for debt service—the payment of principal and interest—on bonds that are issued to obtain, up front, all the funds expected to be needed for a capital project. The three scenarios differ only in whether all, or only some, of the projected IWTF receipts are pledged for debt service, and in whether the projected receipts are calculated on the basis of the existing fuel tax rate of 20 cents per gallon or on a higher rate of 24 cents per gallon. All three scenarios provide dramatic illustrations of how IWTF receipts can be effectively used to generate the funds needed for major capital projects.
In principle, the IWTF receipts could be used to provide not only a return on debt instruments such as bonds, but also a return on equity investments. Such equity investments would not likely take the form of direct ownership of the facilities themselves that are financed, since ownership of the nation’s locks, dams and public ports would presumably be kept in the hands of the federal or local governments. However, there are a variety of structures for P3 projects, and in a particular case the private sector partner might provide its funds in the form of an equity investment rather than as a loan.
Therefore, one might expect that any discussion of how to carry out the P3 pilot program under Section 5014 of WRRDA would include a reference to the studies called for in Section 2004 on how IWTF receipts could be used to support bonds and how IWTF receipts could be increased. Oddly enough, this connection has not yet been made in the attention that is being given to P3 pilot program provisions of WRRDA.
One of the studies that Section 2004 calls for is a study “on potential revenue sources from which funds could be collected to generate additional revenues for the Inland Waterways Trust Fund.” In carrying out this study, the Secretary of the Army is required to evaluate an “array of potential revenue sources from which funds could be collected” in addition to the receipts generated by the existing fuel tax.

Stakeholders: Ready to Ante Up
For those who have been engaged in the discussions over the past several years about how to find additional funds for our rapidly deteriorating inland waterways infrastructure, there would seem to be little need for such a study. For at least the past several years, the inland waterways industry has been recommending that the fuel tax be increased by 30 to 45 percent, from its current rate of 20 cents per gallon to between 26 and 29 cents a gallon. This recommendation was included in the Capital Projects Business Model prepared by the Inland Marine Transportation System Capital Investment Strategy Team, which was unanimously approved and adopted by the Inland Waterways Users Board on April 13, 2010.
More recently, in a letter dated September 24, 2013, to the House Ways and Means Committee, the Waterways Council and a coalition of nearly 40 stakeholders expressed their support for increasing the fuel tax to at least 26 cents per gallon. Therefore, a “revenue source from which funds could be collected to generate additional revenues” for the IWTF is already in place; namely, the fuel tax. All that needs to be done is to increase the rate, and those who would be paying the increased rate have already come out in favor of it. From the viewpoint of the industry, what is there to study? It might be that this otherwise obvious way to increase IWTF revenues is a victim of the current political logjam in Congress or the strong opposition in certain quarters to any new or increased taxes.  The real purpose of the study might be to see if other approaches can be found that are more feasible politically, or simply to buy some time until the composition or climate of Congress changes. In any event, the current system for funding the IWTF remains in place, receiving the fuel tax revenues paid each year. According to the USB Study, even at the existing tax rate and level of receipts, the IWTF revenue stream would be able to support between $1.4 billion and $1.8 billion in lump-sum payments for inland waterways infrastructure projects over the next eight years. This assumes that the entire IWTF revenue stream would be used for this purpose. If only a portion of the IWTF’s annual receipts were directed to such a use, the lump-sum amount that could be supported would be reduced accordingly, but would still be significant.

Unanswered Questions: great hope
The critical question in any P3 project is how to generate the funds that are required to provide a return on investment to the private sector partner. A source of such funds is already at hand in the annual revenues of the IWTF. Congressional appropriation of IWTF funds for this purpose would be required, but Section 5014 likewise requires an appropriation for any P3 projects under the pilot program of that provision.  If an appropriation can be obtained for a P3 project under Section 5014, then appropriation of IWTF funds to attract private sector participation in the project would be a logical combination of the innovative financing approaches provided in WRRDA. What’s not to like? 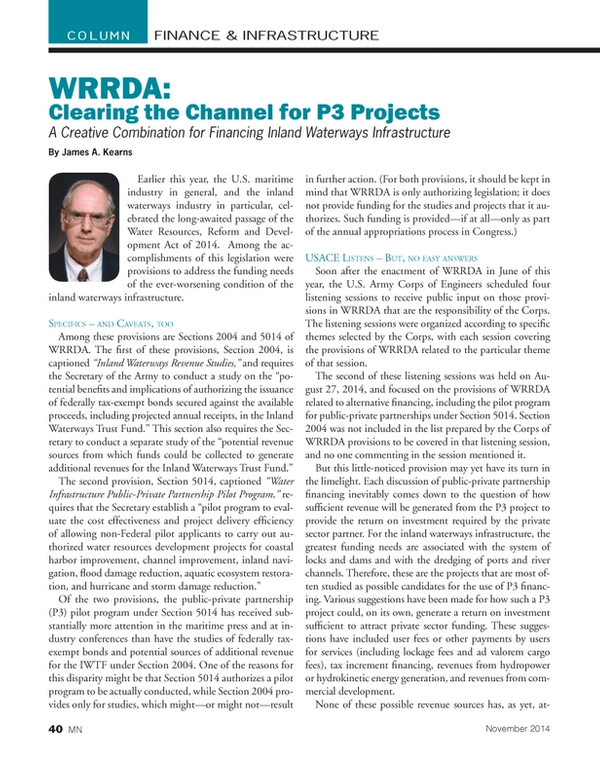