Experience Counts in the Arctic

As interest in offshore commerce in the Arctic increases, key components of any successful operation in this theatre include logistics, assets, and of course, a healthy dose of experience while operating in cold weather environments. To that end, Fairweather LLC’s Arctic operations include the Deadhorse Aviation Center (DAC). Strategically located at Prudhoe Bay, DAC provides oil companies and their suppliers with an aviation command center to manage both onshore operations and Outer Continental Shelf (OCS) exploration and production activities on the Arctic Ocean and Beaufort Sea.
But, anyone in the know will agree that it is foolhardy to forge ahead with any sort of Arctic operations sans serious hands-on experience in the region. Equipment alone won’t get the job done. For many stakeholders, Edison Chouest Offshore subsidiary Fairweather, LLC is just the ticket. And, for Fairweather, they count on General Manager Lori Davey to provide risk mitigation, operational efficiencies and a steady, experienced hand in the region. For everyone involved, that’s the ideal combination.

At the Helm
Lori Davey, a lifelong Alaskan and resident of Anchorage, joined Fairweather in 2012 as director of business development. Prior to that, she owned and served as president of Motznik Information Services, a data service company founded in 1974 that provides highly-targeted information searches for key Alaskan industries. Davey graduated from the University of Alaska Anchorage in 1992 and earned an MBA in 1998. Beyond this, she currently serves as a trustee on the boards of the Nature Conservancy in Alaska and was recently appointed to the Arctic Economic Council. As general manager of Fairweather, LLC, Lori is responsible for directing all of Fairweather’s business activities and overseeing the company’s expansion and management of Deadhorse Aviation Center.
A member of the Edison Chouest Offshore companies, Fairweather, LLC was founded in 1976 by Sherron Perry with a focus on providing aviation weather observation services to remote regions of Alaska. In response to the growth of the emerging oil and gas industry, Fairweather expanded its operations to include a variety of logistics and expediting services to serve both onshore and offshore operations. Today, Fairweather provides a wide range of advanced support services, including drilling and production services, medical services, meteorological and oceanographic forecasting, aviation and airstrip support, environmental research, remote sensing, scientific surveys and expediting and logistics services. Without that support, much of what takes place in the Arctic today arguably would be impossible.
A key component of Fairweather’s Arctic operations is the Deadhorse Aviation Center (DAC). In 2013, Fairweather formed Tulugaq, LLC – a partnership with Olgoonik Corporation and Kaktovik Iñupiat Corporation created to expand airborne assets for remote sensing operations and scientific surveys, bolstered by the purchase of a new Diamond DA42 optionally-manned aircraft. Fairweather is committed supporting safe and secure operations in Alaska and ensuring the needs of every project are met, no matter how complex.

The Arctic: Today & Tomorrow
Today, the maritime and the offshore oil and gas sectors form a large portion of Alaska’s economy. Commercial activity in the Arctic region, already robust, could grow again in the not-too-distant futures. A recent report issued by the McDowell Group outlining the role of the Oil and Gas Industry in
Alaska’s Economy found that 2013 related employment and payroll from “Primary Companies” totaled 5,335 workers, including 4,700 Alaska residents earning $780 million in wages. Including all direct, indirect, and induced employment and wages, oil and gas industry’s spending in Alaska accounted for 51,000 jobs and $3.45 billion in total wages in Alaska’s private sector. Looking beyond all of that, the industry accounted for 33 percent of all wage and salary employment in Alaska (111,000 jobs out of total of 335,000 jobs) and 38 percent of all wages ($6.45 billion in wages out of a total of $17.1 billion).
The future could be even brighter, says Davey. “There is an estimated 40 billion barrels of oil remaining to be tapped on the North Slope and offshore areas of the Alaska Arctic,” she said in September. According to the U.S. Government itself, the Alaska Outer Continental Shelf constitutes one of the world’s largest untapped resources potentially reaching as high as 27 billion barrels of oil and 132 trillion cubic feet of natural gas, with the majority being in the Chukchi Sea. In February 2008, the second most successful oil and gas lease sale in the history of the United States took place, covering millions of acres in the Chukchi Sea. The sale raised a record $2.7 billion in revenue.
Despite that promise, Davey says that there remain misconceptions about the challenges of living and working and working in the Arctic region. She explains, “Many believe that the logistics that are required to operate safely in the Arctic are substantial and costly. Fairweather rarely wins bids based solely on price and this is because we refuse to cut corners on safety to meet a price. We sometimes get beat up over price but often still win the business because of our experience and safety record.”

Challenges & Solutions
Nevertheless, she says, operating efficiently and safely in the Arctic constitutes an enormous challenge.
For starters, she says, the remoteness of the region can be the number one issue. “Prudhoe Bay is 750 miles away from Anchorage and it is incredibly remote. Prudhoe Bay has the only road system leading into the Alaska Arctic. Everywhere else has to be reached by airplane, boat, or snowmobile,” she said. Once there, however, communications becomes even a bigger issue, adding, “Communications are getting better where there is cell service in most villages, but just outside the village it drops to nothing. Internet is also very slow and expensive. Where there is adequate bandwidth it is very expensive – around $1000/ mo per meg.”
Finally, there is the obvious barrier posed by the extreme temperatures and weather. Davy explains, “The North Slope has some of the harshest weather in the world. Temperatures often dip down to the -50 degrees Fahrenheit. There are phase conditions in the winter where all work has to stop till the snow stops blowing and visibility improves. Special personal protection gear is mandatory to be worn when operating on the North Slope. Often times, it is bulky and hard to work in.”
Making a business venture in the Arctic involves a simple formula, says Davey. Oil & Gas and maritime companies need to work with local companies who know the area. “This offers the best chance of success. The Alaska Arctic is fragile and we must do our best to protect it. It is full of resources in oil and gas, but it also provides the food source for our Native people. Fairweather operates in joint ventures with Olgoonik Corporation in Wainwright and Kaktovik Inupiat Corporation in Kaktovik. This allows us to leverage our business opportunities with the local knowledge to achieve shared success.”
Experience does count in the Arctic. That involves balancing the bottom line of business, positioning the client for success, and respecting both the harsh climate and the value of the natural resources to those who live there. That’s where Fairweather comes in and Lori Davie makes it happen. 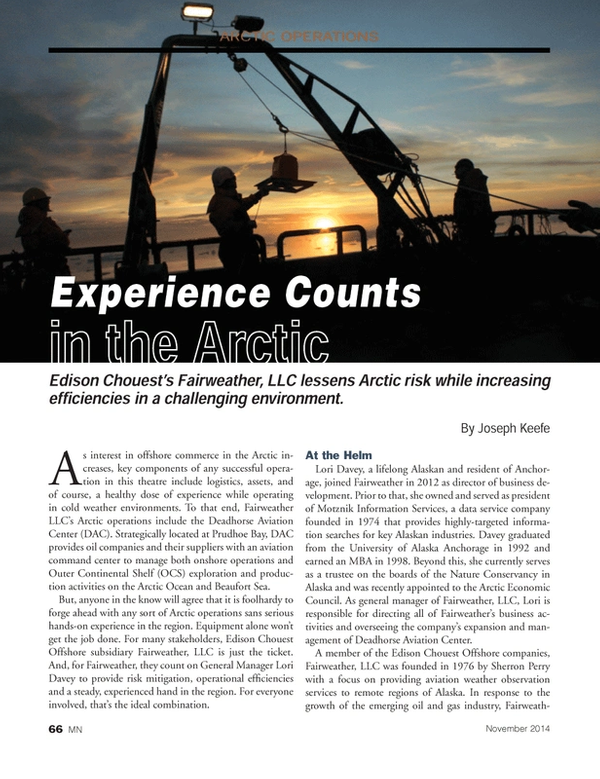 Read Experience Counts in the Arctic in Pdf, Flash or Html5 edition of November 2014 Marine News