Overnight operations are certainly not unusual on America’s inland waterways, but that doesn’t make them any less hazardous. Onboard activities that seem so straightforward and customary in the light of day can take on a decidedly different feel after the sun sets and darkness envelopes the river and shrouds its banks. And, while navigational aids on the river and electronic equipment on board clearly assist nighttime vessel movements, many towboat and tug operators will tell you that fatigue, boredom and endless repetition in the sensory-deprived environment of darkness present very formidable challenges to even the most experienced rivermen.

Inattention Suspected
Such were the conditions on the Mississippi River on a chilly early spring night as a Z-drive tug left the safety of a riverside dock just before midnight to travel south to prepare for a ‘routine’ ship assist job early the next morning at an oil terminal downriver.
The weather was mostly clear under a crescent moon with patchy fog and little wind as the tugboat got underway. The vessel’s mate who was on watch had recently ended a heated argument with a family member on his radio telephone and was resuming his regular duties. Perhaps because of his agitated state, he was unaware of the fact that his tug was slowly drifting to the left as it made its way downriver. He soon began to sense the vessel’s departure from center channel, however, and was preparing to adjust his course to starboard.
Before he could alter course, he heard a loud rumbling and felt a shudder from the tug’s port Z-drive unit. He quickly took the port unit out of gear, turned sharply to starboard and returned to the dock he had departed from less than 30 minutes earlier. Preliminary investigations at the dock revealed that not only had the tug left the channel when traveling southbound, but that the resulting grounding had torn off the vessel’s Z-drive, spilling an unknown quantity of what was assumed to be engine oil, accounting for the sheen which was spotted on the surface at daybreak.
After notifying his company of the incident, the mate immediately called his license insurer’s 24-hour claim reporting hotline and within 15 minutes was speaking with a local maritime attorney assigned to him by his license insurer. The lawyer calmed him down and provided him with guidance and instruction to help prepare him for his impending initial Coast Guard interview which took place at the dock in the early morning hours. In later private conversations with his attorney, the mate reluctantly conceded his assumption that the tug had grounded outside the channel, but still maintained that the vessel had not yet left the channel at the point of impact.
While leaving these and other critical questions and assumptions to Coast Guard investigators working the case, he met with his attorney to prepare a statement and complete the CG2692 marine casualty report form. Predictably, less than two weeks later, the licensed deck officer was contacted by the local Coast Guard Marine Safety Office (MSO) and directed to come in for a more in-depth interview related to the facts surrounding the grounding. He attended the interview with his maritime attorney by his side.

Cell Phone Use Investigated
As the interview proceeded, it quickly became clear that the investigators suspected that the mate was inattentive to his professional duties because he was distracted while using his cell phone to make personal calls. Aware of his earlier argument on his radio telephone, investigators assumed that, once underway, he continued the argument on his personal cell phone, distracting him from his responsibilities. Pursuing that suspicion, the Coast Guard’s investigating officer requested to see the mate’s cell phone records for the period several hours before the early morning grounding. Knowing that the records would be subpoenaed if they did not comply, the attorney instructed his client to contact and procure them from his cell phone carrier. Thankfully for him (and his license), the mate’s insistence that he had not made nor received any personal cell phone calls in the critical pre-grounding timeframe was confirmed by Verizon’s records of his account.
While clear of that suspicion by investigators, the mate, who had been abruptly terminated by his employer for cause following the incident, still had to confront impending negligence charges being brought by the Coast Guard for the actual grounding and resulting minor spill of what turned out to be gear oil from the vessel’s damaged propulsion drive.

A Generous Offer
Prior to bringing charges, however, the Coast Guard somewhat surprisingly proposed a settlement offer of the case under which the mate would accept a four-month suspension of his USCG license, remitted on a four-month probationary period. The net result being that the mate would be allowed to work under his license as long as he had no further license incidents during the four-month probationary period and enrolled in a Bridge Team Management course of 24 hours or more duration.

After consulting with his attorney and weighing his chances of receiving a better outcome if he rejected the Coast Guard’s settlement offer, he decided to accept and sign the settlement offer. The thought of looking down the barrel of negligence charges and facing a Suspension & Revocation (S&R) proceeding was far more daunting than successfully completing his probationary period and attending the prescribed course, he concluded.
While this case had a relatively positive outcome for the mariner because of prompt reporting, quick attorney intervention and the mate’s candor, clearly the Coast Guard’s strategy and the mate’s ultimate fate would have been decidedly different if his cell phone records revealed he was using his device while on duty the night of the grounding.

A risk worth avoiding
It’s a fact of life in the modern world that rarely a day goes by when news reports of a horrific truck, bus or automobile accident is not attributed to operator distraction of some kind … typically involving a hand-held electronic device. The message to professional mariners operating commercial vessels on America’s waterways is the same: That phone call, text, or email can all wait until the end of the trip or duty period. Suffice it to say that, when on the water in day or night operations, the consequences of ‘distracted driving’ can be as bad or worse for a mariner’s career than any similar transgressions on the road. 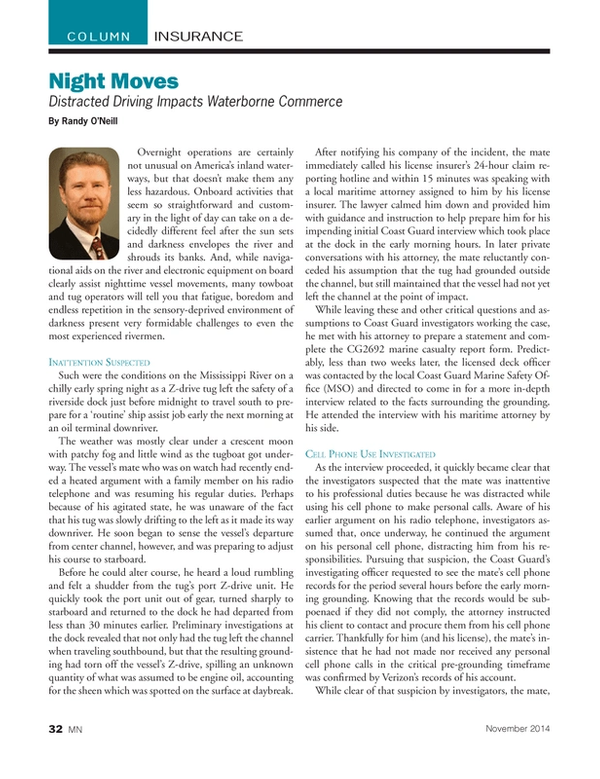