BOATBUILDING: From Estonia with Love

Lyman-Morse Boatbuilding, the classic Maine boat designer and builder will build to Baltic Workboats design for the domestic workboat market.

Lyman-Morse Boatbuilding, the classic Maine boat designer and builder will announce at this year’s International WorkBoat Show that it has entered into the domestic workboat market as the Jones Act builder for the Estonian, Baltic Workboats wave piercing pilot boat, currently popular with Danish and Belgian pilots.

How do you feel about taking on something as unusual as building a pilot boat designed and built in Estonia, we asked Drew Lyman, President of Lyman-Morse boat works? “It is pretty exciting venture for us. It really diversifies us into this commercial world more so than we have been in the past,” Lyman replied, adding, “We had done some a couple years ago but nothing ever came of it; it wasn’t the right set up for us. This set up with Baltic is going to be pretty advantageous. I think for both of us.”

And Estonia?
“We just got back from the yard over there and the outfit is top notch. And so that is always the question mark when you consider these things; what the support looks like,” Lyman replied.

“And I was really surprised with what I saw over there. I told the owners of Baltic you never know, you never know where Estonia is,” he said with a laugh. “Then you get over there and you are like wow! I mean if that yard were in the U.S it would be blowing people away right now. They have a ton of work in Europe and it is a couple of younger guys that own it. It is pretty cool.”

Estonia actually
Estonia is in Northern Europe where it borders the Baltic Sea and Gulf of Finland. It includes more than 1,500 islands, one of which is Saaremaa, home to Baltic Boat Works’ state-of the-art indoor production facility. It is renowned for its shipbuilding heritage over many thousands of years.
Formerly part of the Soviet Union, Estonia is dotted with castles, churches and hilltop fortresses. Its currency is the euro. It is rated highest in the world for political freedom, tenth in press freedom and third in literacy at 99 percent. Also of note, Estonia is also said to be one of the world’s most advanced digital societies. Looking ahead for the complicated world of workboats, that just might be important.

And the boat?
“Our design, engineering and construction teams are delivering workboats with proven designs around the world. These vessels fulfill customer’s needs, providing them an even safer, more efficient and environmentally friendly product – a workboat that just performs in many sea conditions. They work because they’ve been built, they’ve been tested, and they’ve proved they’re seaworthy performance in real-life situations. We’ve taken a new approach to the workboat industry. Baltic Workboats wave-piercing technology is making a significant difference, providing unrivaled sea keeping in high seas and reliability that is unmatched,” says Margus Vanaselja, CEO of Baltic.

“I have driven the boat and it is a wonderful machine and higher end than I ever expected a pilot boat to be, said Lyman, adding, “The Baltic guys really solidified this new hull form, it’s a revolutionary new design and the engineering behind it is impressive.”

“They have spent a lot of time and resources into the hull form. And they have a whole tank testing system right next to the boat yard, so they have really proven this out through engineering.”

Port Everglades’ new pilot boat
Carl Mahler is the man who brought the Baltic Workboats pilot boat to Lyman-Morse, but only after he convinced the Pilot Association of Port Everglades to buy one.

He explains, “I am a pilot at Port Everglades. Three years ago, we decided we need to replace one of our 30 year old Bill Preston designed pilot boats. As a naval architect and marine engineer, the pilots put me in charge of looking for our next pilot vessel. I reviewed a lot of other vessels and was amazed at the promises they made for this wave piercing pilot boat from Estonia, of all places. The claims that were made about the efficiency of their proprietary wave piecing hull and the relative comfort in a rough sea caught my eye.”

Indeed, Mahler liked it so much that he joined the company as head of sales for the United States two years ago. Notably, the Port Everglades Pilots just celebrated two years of service from the Baltic Pilot, the Pilot No. 7. Mahler gushes, “It is fast, safe, fuel-efficient and a very comfortable ride. Everyone loves it.”

In a nutshell, the wave-piercing bow design provides a longer waterline length when compared to a traditional hull vessel. In rough sea conditions, when the bow becomes submerged, the top surface of the bow creates increased down force, which compensates for the buoyancy of the bow.
The bow design reduces pitching motions and provides a smoother ride for Captain and crew at all speeds. When compared to a traditional hull, a wave-piercing hull design provides 40% less vertical acceleration and up to a 30% improvement in fuel economy, which improves the bottom line of your business.

Mahler told MarineNews that the Baltic Workboats wave-piercing series hull design has been thoroughly tested in rough sea conditions to deliver exceptional performance and helm control in the most challenging marine environments. The wave-piercing bow is deep and slender for high speeds and fuel efficiency. The maneuverability of the WP-Series is among the best available in a workboat hull being able to turn completely around 180-degrees in just four boat lengths at high speeds.

Along the way, Baltic Workboats developed a unique wheelhouse that has created a safe working environment both in the cabin and for the crew on the deck. The wheelhouse offers nearly 360-degree visibility and was developed in collaboration with leading nautical experts from Estonia, Belgium, Sweden, Germany and the United Kingdom. The captain has a center position with uninterrupted views of the deck and boarding areas with additional skylight windows. Moreover, all Baltic Workboats wheelhouse designs are securely mounted to withstand hard impacts or collision ensuring the safety of the captain and crew.

Beyond the advanced wave-piercing and self-righting capabilities of a Baltic Workboats US vessel, its innovative design keeps the deck and cabin virtually vibration and noise-free. By resiliently mounting the wheelhouse, the design delivers smooth, whisper quiet operation as low as 63 decibels (less than a car on the highway) and is available for sea trials in Florida.

Domestic Boatbuilding: Transition by ‘Design’
Asked if the Estonian computer design specifications would translate to his shop, Lyman said, “That’s the beauty of the yacht industry, especially when you go into these upper end commercial boats. We are fully vested in the same computer programs, so the transition is going to be relatively seamless. And the other side is that they have 30 plus engineers and designers on staff. So, with their team and our team, we have a pretty good design office as well.”

“I think once we have put the word out in New Orleans, I think we will feed into other areas. Once people hear about what we are doing, our quality will speak for itself,” Lyman said.

Proven Design for a Proven Business Model
This also isn’t the first time an international design has made its way into U.S. yards. The most familiar manifestation of that trend (perhaps) was Damen’s decision to sell its designs into the Jones Act, domestic markets. Separately, Blount Boats made history when it delivered the Atlantic Pioneer, America’s first U.S. Flagged Crew Transfer Vessel (CTV). That 21 meter aluminum vessel was designed by South Boats IOW (Isle of Wight). And, not to be forgotten, way out on the left coast, All American Marine attained exclusive North American building rights with one of the world’s top naval architects and designers – Nic de Waal of Teknicraft Design, Ltd. in Auckland, New Zealand – and has successfully delivered customized versions of those designs many times.

Baltic Workboats, already having delivered one workboat into the U.S. market, now intends to introduce – and build – their designs in the colonies, as well. “And once people see that and feel that quality in conjunction with a great design and great boat yard over in Estonia, long-term, I think this can be very successful,” said Lyman, adding, “Outside of the pilot boats, this could mean fireboats, Coast Guard projects, and other types of workboats. We will see how that fits within the system of creativity.” No doubt, very well indeed.

This article first appeared in the November print edition of MarineNews magazine. 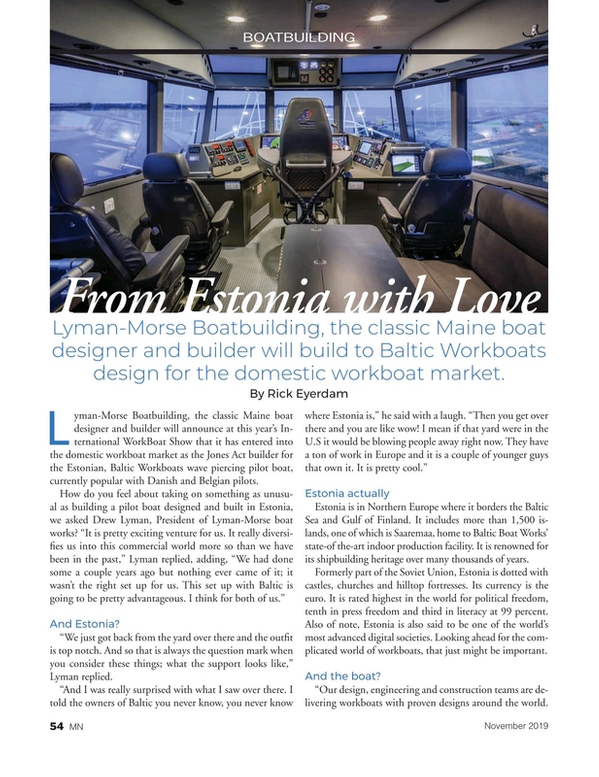 Read BOATBUILDING: From Estonia with Love in Pdf, Flash or Html5 edition of November 2019 Marine News

Other stories from November 2019 issue