Humanity will forever remember 2020 as the “Year of COVID-19” fraught with the pains of a pandemic and its impacts on our physical and mental health. Yet, as a navigation representative along the Mississippi River Ship Channel (MRSC), I will always be able to see the bright side. In this case, that is life outside of COVID. The Mississippi River Ship Channel Deepening began in 2020, oddly enough on another date tied forever to a tragic time in our history. As a major focus for the Big River Coalition, the project to deepen the ship channel to 50 feet was one that I worked on for eight years prior to the official start of dredging on September 11, 2020. Yet the euphoria of success was numbed by the state of the pandemic. And while there were no parties to celebrate, the event remains historic.

The deepening is the flagship of improvements designed to maximize the effectiveness of maritime commerce on the Mighty Mississippi, our nation’s river linking 31 states to international trade. In many ways it remains true that the Mississippi River feeds the world. The river composed of over 250 tributaries combines more miles of navigable waterways than the rest of the world combined. Projections are that the ship channel deepening will eventually capture another 20% of U.S. grain exports, raising the totals from approximately 60% to over 80% of all U.S. agricultural exports. The Mississippi is also the only place in the world where a major navigable waterway is directly linked to a large productive agricultural zone – 350 million acres of farmland are within 250 miles of the Mississippi River and tributaries.

It should be no surprise that there are improvements in the works for the ship channel as The Great Flood of 2019 led to calls to “Fix Southwest Pass”. I often refer to Southwest Pass as “the revolving door to international trade.” Many are surprised to hear that more water was passed down the Mississippi River during 2019 than in any other year, shattering not just eclipsing other renowned floods like those of 1927 and 1973. An important measurement utilized to measure flood waters is an “acre foot”, equaling approximately 326,000 gallons of water, the amount an acre of land would hold if covered throughout in one cubic foot of water. The Great Flood of 2019 passed 185,000 acre feet more than the significant flood of 1973 and over 210,000 acre feet more than in 1927 – a flood that forever changed our nation and the management of this river system.

The National Oceanic and Atmospheric Administration (NOAA) confirmed that the nation experienced the wettest 12-month period in recorded history, going back 124 years to 1895 when records began being kept. In 2019, there was a lot of focus on the ship channel, and leaders looked to the Big River Coalition for insight. We strive to never waste a good emergency, and this spotlight meant we were expected to propose real solutions. The response we campaigned was titled Full Funding Floats All Boats, and it requested an increase in federal funding to allow the U.S. Army Corps of Engineers (USACE) to better respond to channel maintenance.

Full Funding Floats All Boats was designed to increase the USACE’s ability to maintain authorized channel dimensions of the MRSC. The Big River Coalition estimates that $200 million in annual funding would enhance the USACE’s ability to restore and maintain Congressionally authorized channel dimensions. The benefit of knowing what the final budget is provides surety in response versus having to wait until funding was available and flood-driven shoaling had already started.

The Coalition’s promotion focused on increasing the President’s budget request, the starting point for the nation’s federal budget process, which remains in the range of $90 million – although 10 years ago it averaged about $65 million. Thankfully, the U.S. Congress heard our pleas and committed significant supplemental funding through the USACE Work Plan and supplemental funding. Confirmation for the Coalition’s financial target was that over $200 million was appropriated in both fiscal year (FY) 2019 and 2020 – both record amounts, with FY 2020 establishing the new record of over $246 million. However, if we have a low river stage year there is no guarantee that such funds would flow, and the off years with a dedicated budget would allow other channel features to be done. Many of those features help reduce dredging in high river years.

The increased appropriations allowed the USACE to fund their cost-share for the ship channel deepening and make other adjustments outlined by the Full Funding Floats All Boats campaign – mainly the ability to issue dredge contracts before shoaling begins. For the first time ever, the USACE has three hopper dredges under contract in early 2021, and in FY 2020 the first Gulf Coast Regional Hopper Dredge Contract 2020 was awarded and allowed the industry hopper dredge Newport to work on shoaling between the USACE New Orleans and Mobile Districts. The Regional Hopper Dredge Contract in FY 2021 will provide another hopper dredge for channel maintenance next year.

Dredge contractors in response to the increased appropriations and market indicators have also responded by financing large capital improvements for new equipment, by documenting that three new large hopper dredges are being constructed in U.S. shipyards. There are also several new cutterhead dredges being built, and it is expected that there will be work for all of them.

A quick rundown of dredge contracts along the ship channel including the deltaic passes shows a tremendous amount of work to be completed over the next two years, with totals of work approaching 65 million cubic yards (mcy) of material to be removed. This rundown includes the Phase 1 of the ship channel deepening (18.5 mcy), FY 2021 channel maintenance in Southwest Pass (estimated 18.5 mcy), existing contract for the Hopper Dredge Disposal Area (14 mcy), dredging of South Pass for the first time since 2007 (10.5 mcy) and Tiger Pass being dredged for the first time since 2012 (1.9 mcy).

The present timeline suggests that the first phase of the deepening to 50 feet will be completed by the end of 2021. This will open up the first 175 miles of the ship channel to the deeper draft (50 feet), and channel maintenance in FY 2021 will be off to a good start with the three hoppers under contract and the regional hopper contract to add the benefit of another hopper dredge to increase channel maintenance. Hopefully, as the impact of the pandemic fades, the world will notice the improvements made to help Fix Southwest Pass, and the channel maintenance will also be used beneficially to restore wetlands in the environmentally sensitive birds-foot delta. In 10 years the USACE restored over 10,600 acres (almost 17 square miles) of new marsh or wetlands in the delta. Based on the current contracts I believe that total will eclipse 15,000 acres over the next two years with up to 4,000 acres to be added by the work presently under contract as highlighted above.

Clearly, the calls to Fix Southwest Pass have placed a lot of focus on our advocacy efforts. However, waterways management is a team sport, and many will share in the rewards of increased channel maintenance and maritime commerce that can help drive our economic recovery. 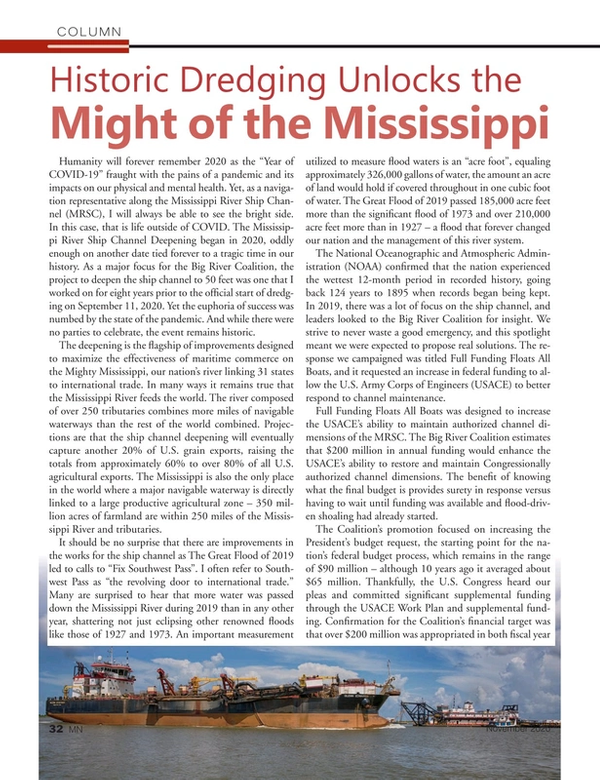 Read Historic Dredging Unlocks the Might of the Mississippi in Pdf, Flash or Html5 edition of November 2020 Marine News

Other stories from November 2020 issue