Low sulphur fuels, scrubbers, LNG and other solutions are all part of the mix. Handicapping the impact of any of these options for the bottom line is anything but easy. Getting greener is not the problem; determining the best way to get there is quite another.

By any measure, the business of running vessels will not be the same after January 1, 2020, when the present 3.5% limit on sulfur content will ratchet downward to 0.5%. With the implementation date for the changes, enacted in late 2016 by the International Maritime Organization (IMO) and recently reiterated in the face of challenges by shipping organizations, less than one year from now, cost structures will certainly change.

Roughly, what will the increased costs be? Using a thick crayon on the back of an envelope, we could estimate that 50,000 deepsea ships burning an average of 30 + tons/ day of residual fuels, operating 250 days/ year in international trades, will need to pay an extra $250/ton (a reference number in line with recent price differentials) for fuel – a figure approaching a staggering $100 billion annually – with all else held constant. Liner behemoth Maersk has said, “The additional cost for the global container shipping industry to comply could be up to USD 15 billion. Maersk expects its extra fuel costs could exceed USD $2 billion.” Separately, Hapag Lloyd has estimated its extra cost at around $1 billion annually.

This starting point, however, and reflecting only the costs associated with lower sulfur content, is possibly at the low end of outcomes. That’s because it does not consider a rise in oil prices as refiners push more crude oil (and limited amounts of residual) through their crackers and distillation towers.

All that said; the precise magnitude, and even the directions of impacts on shipping company’s bottom lines, is not known. The unknowns are dictated by normally unpredictable shipping market forces and by exogenous impacts of business decisions of oil refiners and downstream participants, all of which impact available supplies of compliant fuels.

The $250/ton number, and variability surrounding it, does not address strategic advantages may be gained (or lost) relative to competitors, who may adapt different business strategies than their peers. Outcomes are not static; they may move around in a dynamic marketplace.

Who Pays the Bill?
Indeed, the profit number emerging from the income statement starts with the top line, and leverages the uncertain proportion of cost increases that can be passed on to cargo interests paying the freight, or conversely, what degree of owners “savings” can be extracted by the cargo side. More “cost recovery” by shipowners (or less ability of the cargo side to capture “savings”) is possible in strong freight markets, than in weak markets (where those paying the freight can drive it downwards).

Much of the conversation centers on scrubber economics and ROIs, with loud voices reverberating from a normally very quiet industry. The business case for scrubbers is defined simply: The capital cost can be paid for by savings in purchasing high sulfur fuel (IFO 380 and similar) relative to their competitors who burn low sulfur fuels (0.5% compliant). The greater the price differential (or ‘spread’), the quicker that capital expenditure can be paid off.

But what if the owners wish to capture part of the “savings” in time charter deals where a vessel charterer pays for fuel and the charterer wishes for a scrubber to be installed? Industry association BIMCO is attempting to bring some commercial clarity. In describing a proposed charter party clause due to be published in Q1 2019, it says: “…The main issue that the scrubber clause is likely to address is possible cost sharing between owners and charterers of the installation of a scrubber. The clause could provide a cost sharing formula based on the expected life of the scrubber versus the duration or remaining duration of a time charter.”

Savvy financial structuring may be able to put price differentials to real use in the bulk shipping realm. Nikos Petrakokos, Vice President, Head of Maritime Environmental Innovation, at Seabury Securities, told MLPro, “Through the structure of our Seabury Maritime specialized agreements, it is possible to monetize 'savings' that are likely to accrue to consumers of high sulfur fuels, and partially use streams of such savings or charter premiums to cover the costs of exhaust gas 'scrubbers' without draining cash reserves.”

On the liner side, the challenges are different, as carriers have unveiled a new type of “black box” in arriving at fuel surcharges. Maersk, in the fate of its estimated $2 billion extra expenditure, announced in September, 2018, that it would preemptively implement Bunker Adjustment Factors, commencing in January 2019, according to a series of (hidden) formulae which consider bunker prices at selected ports (3.5% sulfur throughout 2019, then 0.5% sulfur), with fuel intensity of particular trade routes. In the first iteration, using a notional IFO 380 price of $400/ton the new bunker surcharge, for a 40’ box, ranged from $90 (USWC to Far East) to $600 (ECSA to N Europe), with the mainline Far East to Northern Europe route pegged at $480 per box. Hapag Lloyd announced that it too would be developing a new fuel pricing formula.

The lack of transparency is a problem. An October 2018 article by Philip Damas, Head of London-based Drewry Supply Chain Advisors, offered, “Given the scale of the extra costs triggered by the new regulation and the carriers’ expectations that their pricing and fuel charge mechanism with customers must be restructured, there is a need for carriers to address the transparency concerns expressed by their customers.”

More Clarity on Prices: From where?
The back of the envelope calculation above starts with a ‘spread’ of $250/tonne being in effect at the outset of the new rules, in January 2020. That uncertain number reflects pricing of Jan 2020 delivery traded contracts on low sulfur gasoil, versus 3.5% fuel oil throughout 2016 and 2017. During the scrubber-mania phase of mid 2018, as oil prices were turning upward, the spread reached over $400/ton; by end 2018, it had backed down to $300/ton. Uncertainty over fuel prices prevails, with experts, insiders and stakeholder all over the map.

One school of analysts sees residual fuel prices dropping dramatically (which would widen the spread), in early 2020, as refiners cannot process it into higher value outputs. Well known energy consultants Wood McKenzie wrote in September 2018, that: “Displaced HSFO can be processed within the global refining system’s spare residue upgrading capacity, but its discount to crude needs to widen to make using this spare capacity economical.” They added “We also believe that by 2020, the price differential between gas oil and HSFO will be roughly double the 2017 differential.” Drewry agrees, suggesting in an October 2018 article, as energy prices neared their zenith) that “Based on independent ‘futures’ prices, low-sulphur marine fuel prices per tonne will be 55% higher than current high-sulphur fuels and Drewry considers that the probable ‘worst case’ scenario is that fuel costs (paid by carriers) and fuel surcharges (paid by shippers) in global container shipping will increase by 55-60% in January 2020.” These numbers imply spreads – of IMO low sulfur compliant fuels above high sulfur marine fuels, on the order of $300 to $400/ ton, or more.

Another view, that of narrowing spreads (and, hence, a weaker business case for scrubbers) is borne out by shipping executive Paddy Rodgers, who heads up large tanker owner Euronav. He said, in an October Bloomberg interview that certain refiners have said: “The spread between the old [high sulfur] and the new [low sulfur] fuels will be half of that the analysts have suggested.” He added, “We believe that a year out, that’s going to come down even further as more oil becomes available and our costs are not materially affected.” Laura Blewitt, Energy Fundamentals Analyst at RBN Energy, told MLPro, “With the spread narrowing nearly $100/ton in the past six months to the $300 range, I see trader’s confidence in the availability of low-sulfur marine fuel supply is growing."

Ralph Grimmer, Senior Associate at transport fuels consultant Stillwater Associates, based in Irvine, California, noted the challenges bedeviling price forecasters. “All things being equal,” he said, “lower crude prices should result in lower product prices, potentially minimizing the negative price impact of impact of IMO 2020 if Brent doesn’t climb back to summer 2018 levels.” Nevertheless, Grimmer cautions, “With all of the above factors changing IMO 2020 marketplace dynamics markedly over the past 6 months, forward prices and differentials are still a moving target. Many observers have thought that current futures prices through 2020 understated the likely impact of IMO 2020.”

Matt Muenster, Senior Manager, Applied Knowledge for Breakthrough Fuels, also weighed in. “While it’s true Monday, December 10th, was the first day of trading on NYMEX (CME) Globex, 0.5 percent futures, we have yet to see trade volume begin to move prices in the market. This is not particularly surprising for new products on an exchange. Of course, the interest on these futures will pick up as we move closer to the coming regulatory timelines and as clearer expectations for the price of oil in 2019-2020 take shape.”

Ralph Grimmer stressed the role of futures in demystifying the post 2020 landscape, saying, “With the emergence of futures and transactional prices for IMO 2020-compliant marine fuel becoming visible in December and January, industry will finally have a more tangible basis for preparing to optimize operations beginning in late 2019. Shipowners, refiners, and bunker suppliers will all benefit from this increase in price visibility.”

Matt Muenster offered a similar sentiment. “Most forecasts still peg 0.5 percent <sulfur> prices in a range of 75 to 90 percent of LS MGO 0.1 percent. Bearing these figures in mind and analyzing established futures markets for IFO 380 and LS MGO reveals it is presently reasonable to expect 0.5 percent sulfur fuels to have at least the premium LS MGO had over IFO 380 across geographies in the past year, or about $225-$250 per metric ton. Estimates with steeper discounts to high sulfur fuel oil due to excess supply have pushed this figure closer to $300 per metric ton.”

Looking ahead, the only thing that is truly clear is that there are many variables – most of them difficult to predict – that will impact the cost of ‘green’ in the future for shipping. Less clear is how much green it will take to produce that greener footprint that the IMO aims to produce. Shipping is going to get cleaner and more expensive as the January 2020 deadline comes and goes. All that said; the former metric will be much easier to predict than the latter. That much we can count on.

This article first appeared in the November/December edition of Maritime Logistics Professional magazine. 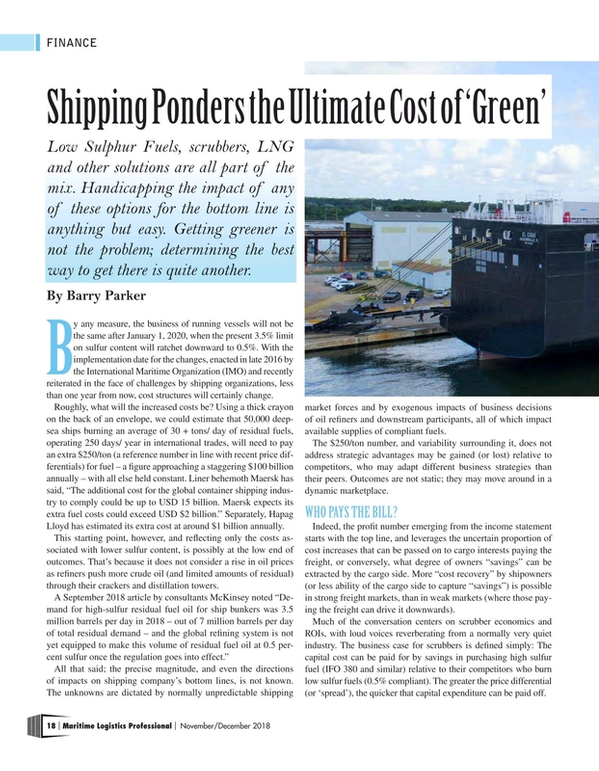 Other stories from Nov/Dec 2018 issue