The arrival of the Port of Portland's 982-foot-long floating Dry- Dock 4 completes five years of research, planning and construction, and was made possible by the confidence and financial support of Portland Metropolitan Area voters.

In 1974, the Port commissioned a study on market and facility development at the Swan Island Ship Repair Yard by the New York firm of John J. McMullen Associates. Findings of that study revealed Portland had only one way to go if it was to remain a major West Coast ship repair center.

It must plan and provide facilities for servicing large ships, particularly those soon to be in the Alaskan crude oil fleet.

The Port and consultants designed a drydock that would be 982 feet long, 185 feet wide and capable of lifting 81,000 long tons. This plan, along with construction of an additional 3,000 feet of repair berth space, new cranes and ancillary facilities, was presented to the voters in the tricounty Port District in November 1976, and passed with a margin that looked like a mandate. The total amount authorized was $84 million, with the plan that the obligation would come off the tax rolls in from three to five years, at which time it was anticipated revenues from the new facilities would be sufficient to pay off the bonds.

With the green light from the community, the Port and its consultants began an intense period of final design, and were calling for bids on all major projects by late fall 1977. The Port benefited from an intense period of international competition. Ishikawajima- Harima Heavy I n d u s t r i e s Co.

(IHI) of Japan was low at $17.5 million among eight bidders for the drydock—nine million under the Port engineer's estimate, and more than $18 million under original estimates.

Other major bids came in under estimates. With the entire Swan Island Ship Repair Yard expansion expansion project nearing completion, it appears likely the total project will cost about $20 million less than the $84 million authorized.

The effect may be that the project could come off the tax rolls in two years, instead of the three to five predicted.

The Swan Island Ship Repair Yard is the only publicly owned, privately operated major shipyard in the United States, occupying 125 acres (50.59 hectares) at the northern tip of Swan Island on the Willamette River's 40-foot (12.19 meters) channel. It is five miles downstream from Portland's central business district.

At Swan Island, the Port of Portland has consolidated its drydock and repair facilities to provide a modern shipyard equipped to satisfy a wide range of requirements.

Swan Island's drydocks are constructed to serve vessels ranging in size from small river tugs and barges to large, oceangoing ships, with each of the three drydocks having an average lift time of just over 35 minutes.

The new drydock will accommodate the largest vessels operating in the Alaskan oil trade. Its location in Portland makes it possible for energy carriers to clean tanks and consolidate oily wastes while p r o c e e d i n g northbound from southern waters, then lay over in Portland for maintenance and/or repairs.

Dry Dock 4 was built in accordance with American Bureau of Shipping rules and requirements to meet, or surpass, a + A-l classification.

All will be revolver-type gantry cranes on tracks running the full length of the new pier. A 20-longton lift capacity crane will be located on the outboard wing wall of Dry Dock 4 for additional service.

Working berths are backed by six idle ship berths with 3,200 feet (975.35 meters) of total length, and are serviced by mobile truck cranes.

Northwest Marine Iron Works, one of Portland's primary ship repair and conversion companies, is responsible for outfitting and testing the drydock. This job will be performed under a $2.67-million contract with Ishikawajima- Harima Heavy Industries.

Seven ships have already been booked for Dry Dock 4 during 1979 — j u s t one less than had been projected for its first year of operations. First ship to go on the blocks will be the 894-footlong S/S Overseas Chicago. All seven ships scheduled for Dry Dock 4 are involved in the movement of Alaskan crude oil. 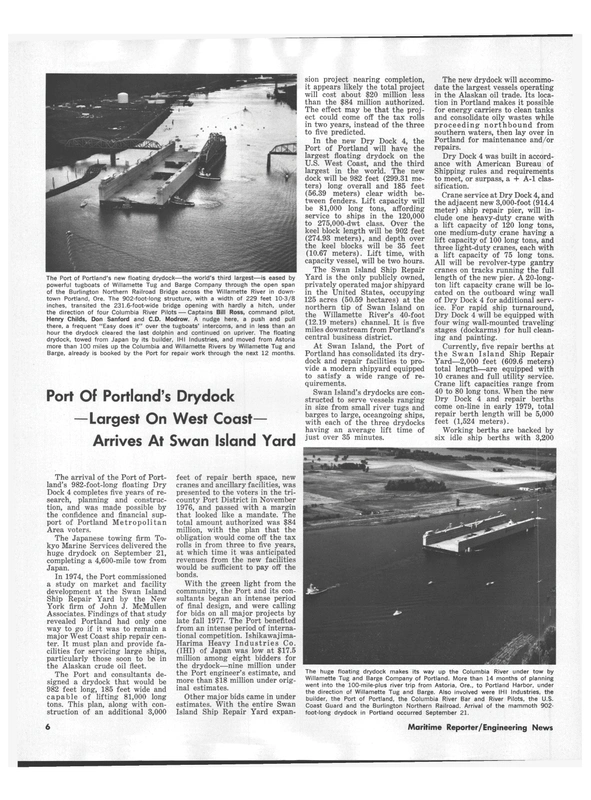 Other stories from November 1978 issue