Interferry Charts a Course for Growth

Interferry CEO Mike Corrigan explains why the global trade association is poised to take its work to the next level.

While I respect the mantra of cautious optimism, I can’t help feeling genuinely excited that 2019 could prove to be a milestone year in the continuing growth of Interferry’s influence as the global voice of the ferry industry.

We’ve come a long way since our US origins in 1976 as what was essentially a networking movement, but developments in recent months already suggest we are on course for yet more enhancement of our present-day worldwide networking and lobbying relationships.

Regulatory authority the International Maritime Organization (IMO), where Interferry has proactive consultative status, has specifically requested our assistance after agreeing to act on calls from us and others to increase its involvement with ferry safety in developing nations.  The decision came soon after Interferry staged two fact-finding visits to the Philippines to produce ‘lessons learned’ guidance.

The IMO is also embracing our interventions on ro-pax fire safety and a raft of environmental challenges.  Meanwhile a meeting with the European Maritime Safety Agency (EMSA) has boosted our sense of ever-closer bonds with industry playmakers.

Elsewhere we announced our support for the charity Mercy Ships, whose volunteer-manned hospital ships bring healthcare to the developing world.  We will be promoting them to our industry-wide membership - currently more than 250 ferry operators and suppliers in close to 40 countries – including at our 44th annual conference in London this October.

The conference also dares me to think of a watershed 2019.  London is the global leader in maritime chartering, legal, financial and insurance services, so a record delegate attendance is not beyond reason.  Furthermore, with an Innovation theme, we called for speakers who could focus on step change rather than incremental improvements.  A remarkable line-up of heavy-hitters will explain the potential to transform every aspect of our industry.

Last but not least, we have drafted our strategic plan for 2020-2022, which adds far-reaching weight to Interferry’s vision of making a difference both within the ferry industry and society as a whole.  More on this follows after some details on our 2019 headlines. 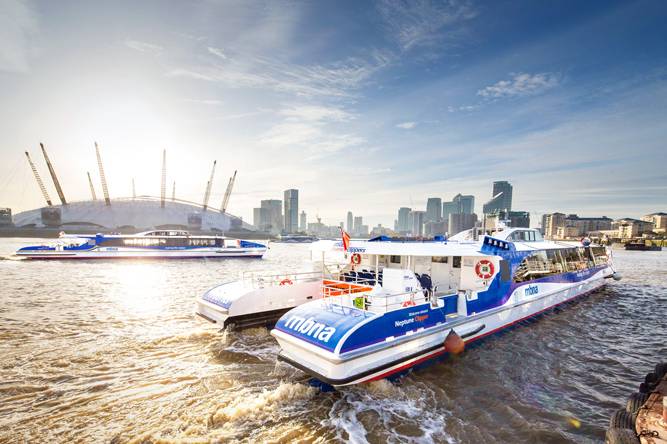 Safety breakthrough
Terrific news came in June at Session 101 of the IMO’s Maritime Safety Committee (MSC) - they agreed to establish a new output on measures to improve domestic ferry safety in developing countries, where virtually all ferry fatalities occur.  Explicitly supported by the IMO Secretary General, the agreement built on a proposal from China and, not least, Interferry advocacy and cooperation with the IMO over many years.  Now a much better defined work plan will go beyond general support to include the development of model regulations.  The initiative will be overseen by the IMO’s head of special projects, who met us shortly before the MSC decision and distinctly asked for our continued contribution.

Findings from Interferry’s Philippines study mission will undoubtedly help the cause.  Under our specially-formed FERRYSAFE project, a four-man team made week-long visits to Manila in March and ferry hub Cebu in May to research dramatic improvements in the nation’s ferry safety record – once the world’s worst but now in line with the global average.

The visits involved informal interviews with 66 stakeholders – from operators to customers – together with seven ferry crossings, shipyard visits and meetings with the maritime, port and Coast Guard authorities.  No ‘silver bullet’ safety solution was unearthed, but several paramount factors consistently emerged – notably government support, reasonably stringent regulations, a weather-dependent no-sail policy, local enforcement and the importance of insurance and insurance surveys.  The team is now developing a best practice document that will be shared with the IMO and other developing nations.

Fire alarm
The MSC meeting in June also approved new draft interim guidelines on ro-pax fire safety, another area of major Interferry engagement over the past few years. We argued that some aspects of the voluntary guidelines required greater discussion to avoid unjustified construction recommendations.  One example - the draft stipulates safety distances for life saving appliances in relation to ro-ro deck openings, yet the distances derive from a study urging further research!  Many member states shared our concerns. 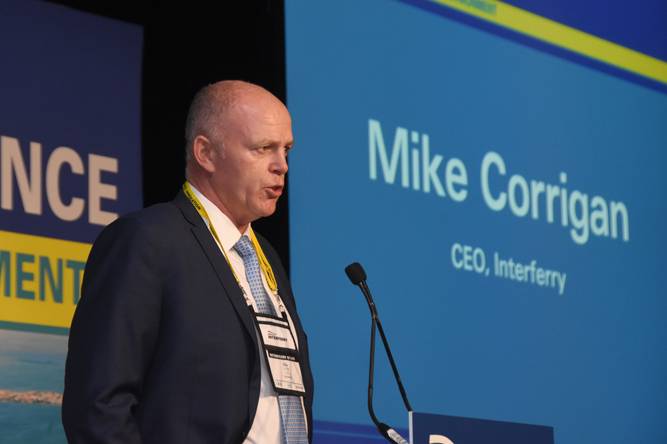 Terrific news came in June at Session 101 of the IMO’s Maritime Safety Committee (MSC) - they agreed to establish a new output on measures to improve domestic ferry safety in developing countries, where virtually all ferry fatalities occur.  Photo courtesy Interferry.

EMSA envoys
In June we met EMSA’s new executive director Maja Kostelac.  We toured their 24/7/365 operations and security monitoring center covering all vessels in European waters.  The drone technology that detects ship-specific environmental spills was very impressive – as was the feedback that Interferry is a highly respected key player in regulatory debate.

Green for clean
Session 74 of the IMO’s Marine Environmental Protection Committee (MEPC) in May confirmed that member states are refining potential short-term greenhouse gas (GHG) measures such as a stricter Energy Efficiency Design Index, shaft power limitations and speed requirements.
Interferry has formed a GHG working group to help the ferry sector’s leadership on IMO emissions targets and will present our own sector-specific ideas at the GHG intersessional meeting in November.  Ferries already lead the industry regarding the uptake and planned installation of battery, hybrid and hydrogen power.

Agreement to work on harmonized rules for discharge water from exhaust gas scrubbers came after MEPC74 noted a worrying tendency of States to introduce local or regional restrictions without scientific justification.  The issue is due to be completed by 2021.  Interferry will continue to maintain its position that existing installations, made in good faith and in compliance, must not be affected by any future changes, while any new requirements should be based on scientific facts.

Step change
Progress on developing zero-emissions ferries will be among the transformational topics at Interferry’s upcoming annual conference in London, which promises to reveal ‘the next big things on the horizon’.  Keynote speakers include renowned futurist hi-tech writer David Rowan, with insights from his recent book Non-Bullshit Innovation: Radical Ideas from the World’s Smartest Minds, and Guy Platten, head of the International Chamber of Shipping - where Interferry is an associate member – which represents more than 80% of the world merchant fleet.

Shipyards will present the latest thinking on all types of construction, while a status report on autonomous ferries will include a legal angle on the potential ramifications of operating with minimal human interaction.  Other highlighted innovations range from terminal berthing and bridge navigation technologies to advances in IT and satellite networks.  Customer service providers will examine developments in terminal interfaces, billing systems and the Internet, while a major insurance company is unveiling its ‘paradigm shift’ analytics-based risk model.  Each day of the speakers program will end with an international panel of CEOs from various-sized ferry companies discussing the innovations required to anticipate evermore demanding regulatory and customer expectations.

The conference sessions on October 7-8 are at the core of a River Thames-side event running from October 5-9, when networking and social highlights include a reception on famed 1869-built tea clipper Cutty Sark and a closing dinner in the historic Painted Hall at the Old Royal Naval College.

Future vision
After 14 years working for a world-class ferry operator, Canada’s BC Ferries, I took the helm at Interferry in April 2017 with a mandate to build on the association’s firm foundations and take us to the ‘next level’.   At our June board meeting and strategic planning session in Copenhagen, the directors acknowledged the collective efforts made to date, particularly through our specially formed domestic safety, security and regulatory committees.  Then it was time to set our sights on new targets to further grow our reach and influence as we drafted Interferry’s 2020-2022 strategy.

The new plan will be presented at our annual conference following final approval at the October board meeting.  It sets out the course for a visionary mission in which we will continue to drive for safety improvements and membership growth in developing nations; allocate the necessary resources to ensure regulatory success; and focus more of our communications on the overall ferry industry, with particular emphasis on analysis of the size and economic impact of our industry worldwide.  Given our current rate of progress and Stronger Together mantra, I’m now encouraged more than ever of our continued success as an influencer and leader in the global shipping industry. 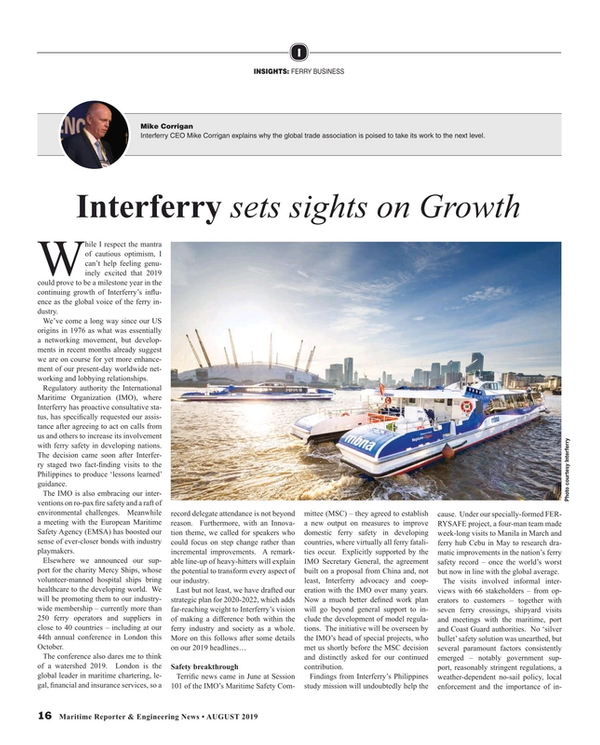 Other stories from August 2019 issue